NEWSFLASH — In solidarity with our East Coast friends, the Puget Sound area would like to announce last night’s light dusting of snow.

Back to our regularly scheduled programming… Instinct vs. intentionality: who wins? Sit down to write and words flow, ready and available, arranging themselves more or less in order for me to plop them down instantaneously on screen. Sit back later and look: the feeling is raw, but the sense makes no sense. What’s it about? So try again: start with the goal, the intention. The words are now stubborn children. They won’t come. Must use my grownup force to pry. Must also be careful to select the right ones for the job. This was so easy before? Well. Now I’m applying cool reason and Intention, the fickle bitch. Where is art on this rectum of a spectrum? Does it lean to the left or the right? 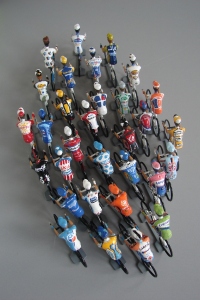 The graduate school application process has been good for me. Even if I don’t get in anywhere, it’s forced me to really focus on my intention: Why am I doing This? And it’s also made me look more carefully at What the Hell Do I Want to Be Writing? It’s been hard to keep a writing schedule during the last month or two, while writing, rewriting, and revising essays about what I write. But that’s okay: it’s ALL still writing. And this kind, though not fiction per se, has been making me consider the Big Questions. Am I an artist? Why am I writing? What is it I want to write about? Yup, questions beget questions. Some things I’ve learned:

So, to my East Coast friends, I raise a shovel, and I salute you, even if the snow I mentioned earlier as having fallen on our sleepy Northwest has now dissipated into the spongy green earth.