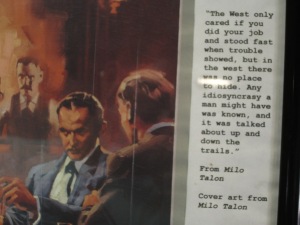 No sooner did we leave Dickinson, North Dakota, than I began to suffer pangs of bison withdrawal.

Luckily for us, there was Jamestown, North Dakota. Only here, they don’t call them bison, but rather by their proper Murican name, buffalo. Sounds better, don’t it? Say it with me: buffalo. Buffalo. Buffalo. And if there is one thing Jamestown is crazy for, it’s buffalo. In fact, it’s called The Buffalo City. (Not Buffalo City, of course; that moniker already belongs to some scrappy little upstart in New York.) 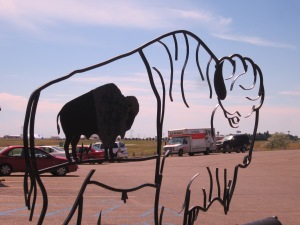 After a quick lunch at Subway, we decided to check out the Buffalo Museum. We found a small recreated pioneer village, complete with a smithy and an old one-room schoolhouse, a church, an antique shop, some goats, and Louis L’Amour’s writing shack. 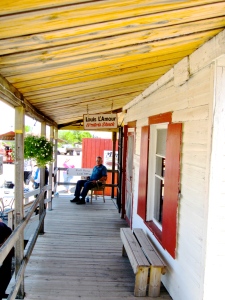 Did I mention that Jamestown is the birthplace and lifelong residence of famed Western writer Louis L’Amour? If there is one thing Jamestown is crazy about, it’s native son Louis L’Amour. The name just rolls off the tongue. Say it with me now: Louis. L’Amour.

Of course, this brings me back to buffalo, which is the only thing that Jamestowners seem to love more than Louis L’Amour. We parked over by the Buffalo Museum, where I saw this wonderful likeness: 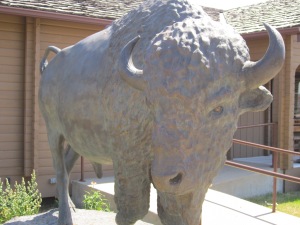 But I was not sated. I needed more. I wanted BUFFALO. Not just a museum. Not just some half-size bronze statue. I needed something to fill the hole that was left when we departed Yellowstone. I needed … well … I couldn’t quite put my finger on it. But to my surprise I turned the corner and lo, there she was. 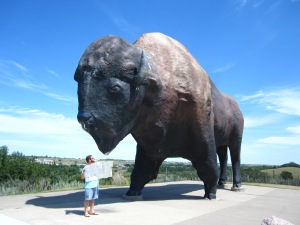 She looked just like my Jimbo, the kindly bison I met in the National Park. I asked her for directions, but she threw me a haughty glance and rolled her glassy bovine eyes. I posed a while at her side, awaiting an epiphany. Then I heard the sound of gunfire off in the distance: I needed to skedaddle. A gunfight was scheduled to take place on the village’s main street at 3 o’clock, just minutes from now. 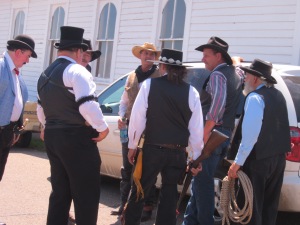 Reluctantly, I headed back toward the car. It would be another five hours to St Joseph, Minnesota, where my in-laws awaited our arrival. Here is a picture of Louis L’Amour’s typewriter: 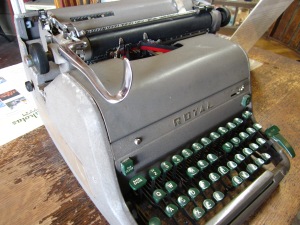 And here are some more photos of the day: