For the next several days I’ll be kicking back with the in-laws in St Joseph, Minnesota: home to the College of St Benedict and a stop on the scenic Lake Wobegon Trail. I’ll blog from here and try to bring you something new each day.

Today I’ll be attending the high school graduation party of a nephew. The theme is the 1950s; unfortunately I left my hair grease and skinny ties at home. I’ll go perhaps as a time traveler then, a visitor from another era, to tell this boy that this is the Golden Age, and that for at least the next sixty years he and all his countrymen will look back at this time of his and shake their heads and say “back in the day…”

Or maybe I’ll just snake some Fritos and cowboy caviar and listen to the music and talk to relatives and be done with it.

Okay, that was the most awesome, most ridiculously extravagant and fun high school graduation party I’ve ever been to. Not that I’ve been to a ton of graduation parties. It was held at my nephew’s family compound … er, barn.

There was a band — the 57 Chevy Band — with a bassist who played what looked like a collage of license plates and bumper stickers and a singer who sounded like early Johnny Cash. They were fantastic. And a garage (in the bottom floor of a converted red barn that serves as the family’s main house) that looked like a set designer’s idea of a Harley Davidson-inspired man cave. Posters of Evel Knievel, Farah Fawcett, Harley heroes and cardboard cutouts of the Duke, a pinball machine, multiple tool chests, lots of chrome, gray, and red, and a sign that reads “My Barn My Rules.” 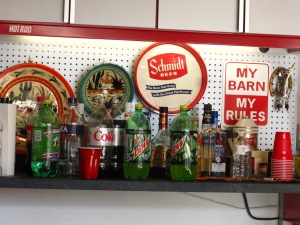 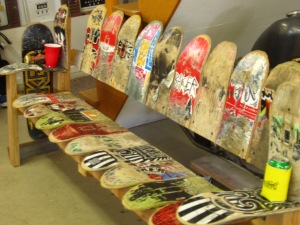 The day was a sauna-like 90 degrees. Even though a large tent was erected outside, many of the guests ended up milling about inside the garage near the large floor fans that had been set up, nursing cold drinks and laughing and catching up with one another. 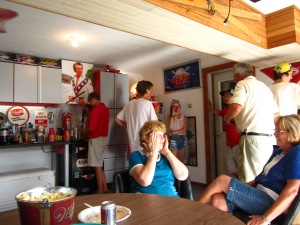 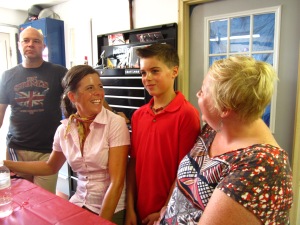 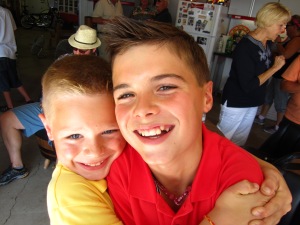 A storm started rolling in this evening as we made our way back to St Joseph from Alexandria. A magnificent sunset incited uncontrollable photo-taking: I’ll spare you the results, but it was pretty incredible.

We stopped for dinner at Charlie’s Cafe in Freeport, the town where Shirley (my mother-in-law) grew up. Apparently, it’s also a favorite of Garrison Keillor, who mentions it frequently in his books and shows. (The Lake Woebegone Trail passes through St Joseph.) Shirley picked up some of their famous car’mel rolls on the way out.

If my sharply honed sense of irony seems lacking in today’s post, I apologize; but honestly, this was a good ol’ fashioned hot summer day of family fun and there is nothing ironic about that.