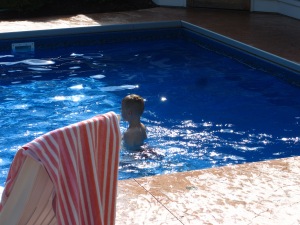 What can I say about it? Death’s a brick wall. We’re all hurtling toward it. We all smash into it one way or another. Ignore it, deny it, accept it, embrace it: it doesn’t matter. Because there it is, waiting with the patience of mountains, of galaxies and black holes. So? Big deal. Make some supper, clean your room, go for a walk.

Today I visited two sick people. One is an aunt in hospice, her body riddled with cancer, her mind riddled with regrets. She spent a lifetime keeping everything neat and tidy and under control. She bought all the best in name-brand appliances. She made all the correct decisions.

She didn’t make it to the fish fry last night. Some days it seems she’s trying to force acceptance of death on herself. She’ll distance herself from those she loves. Other times she’ll reach out, grasp for company, talk about the future. She was chatty today, telling stories and asking questions. “There’s just an endless parade in here,” she complained. “Everyone stopping by unannounced.” She turned to me and my wife. “When is Gretchen coming? Is Darlene coming? Will you two be at dinner? What time do you want to meet?”

We ended the visit when she appeared to get tired; she asked if we’d be back up for Christmas. I told her we would. “I’ll be here,” she said. She looks good, all things considered. Weak, but good. Her hair was gone but she wore makeup, had a little lacy headband on. And, all things considered, she’s fairly with it. I looked at the wall of cards surrounding her collapsible twin bed. They are all pastel pinks and blues and yellows, quoting the Bible in florid script. My eye caught the one that read “One Day at A Time…” Those ellipses scared me.

Our next visit was with another aunt who is relatively better off, having only had hip surgery (nothing more!), and who is suffering from Parkinson’s. A painter all her life, I’ve always thought warmly of her. She may yet go home and see her apartment, crammed as it is with boxes floor to ceiling, all neatly labeled with a life’s belongings. Paintings. Books. Bric-a-brac.

I know what it’s like to pack your worldly possessions up, to have to go through and decide what to keep. It’s hard. As you stare at each item it becomes infinite, a powerful mnemonic that takes you back to some time and place along the way. Our moving van is somewhere in Nebraska today, and if it were to go off a cliff in a ball of smoke and fire, I’d be sorry for the driver and his or her family. Out-of-sight-out-of-mind is a strong countervailing force. But that’s just today. And not for this aunt. She rues the fate of her belongings. Even as my wife and sister-in-law ponder (scheme! plot! conspire!) what to do with all that crap. Of course, the paintings are the most valuable things. Those have meaning to people beyond the things themselves. Better than photographs, they capture her life on the farm as well as her worldview, full of light touches and bright color and lots of white space.

Now here’s this wonderful little lady, all brittle and bitter, seething at the discrepancies in service and amenity between this place, called St Benedict’s at Innsbruck, and the real Innsbruck in Germany. “Doesn’t Innsbruck suggest to you luxury? Good care? Attentive service? Spa-like facilities? Well not here, to them it doesn’t.”

Wherefore such bitterness? The lady I remember is blithe and almost mousy. Is this what awaits me in fifty years?

I imagine that when it’s my time, I won’t be ready either. I can easily imagine feeling gypped and angry (“Five bucks for THIS?”). I remember my Grandma Mary’s last words to me, as I visited her in the hospital just a month or so before she died. She looked pale and frightened. She was always so full of answers, stories, authority. Her words: “Why does it hurt to breathe?”

There’s wisdom in those words.

I’ve heard it said that one ought to live like each day was one’s last. Gag me, what horrible advice. What a bitter and frumpy little old man I’d be, trying to live out a daily bucket list. Impossible. A regretful old saw passed down by one too many cloudy-eyed old grandpas. I say: fill your days with the insouciance of youth, and do it for all the same reasons: you could be hit by a bus tomorrow, or be struck by lightning, or be diagnosed with some nasty malignancy, or simply walk into the wrong movie theater. Would you avoid going to the movies? Would you seriously be able to avoid all the crap jobs and crap relationships? All the hours spent waiting in lines? Would you seriously spend each day living someone’s prescribed dream, climbing Kilimanjaro, having a threesome or swimming with a goddamn dolphin?

I wouldn’t. Maybe that’s just the thirty-four year old in me talking. I’m not twenty anymore, nor am I fifty. But it just seems to me that that brick wall is going to be there, one way or another, rain or shine, no matter what I do. So what I do matters very little, I suppose. I’m guessing it’s probably better to keep a good attitude about what I do, to recount it to myself, and occasional tell myself, “that was a good one,” or “well, that day was a drag, but the one before was all right and tomorrow ought to be better.” Because until we reach that brick wall, we’re all still living. Idiotically. Moronically. Sarcastically. Or maybe blissfully, enlightened and serene.

I wanted to tell Aunt #1 that there is always today, no matter what choices she made in the past. But that’s some serious Grade A Hallmark/Hollywood bullshit right there. I mean, sure, it can be true, as far as you throw it. Redemption is always possible. Rare, but possible. I’ll grant that. It’s possible to find grace in one day. But seriously? Why do people expect so much from death? It’s a wall. Big deal.

I dunno. I’m sitting here at my sister-in-law’s kitchen table, looking out the window at my nephews running around the pool playing tag. I’m out of cookie-cutter wisdom. Maybe I should’ve just told her that there’s time yet to find grace and acceptance. That there’s time to make amends, quit smoking, and climb the Himalayas. Or maybe what I should have said was: yes, dinner sounds nice. And then let’s go swimming.