We’ve made it this far. And the AC has so far been cooperating (knock on wood). Today was a shorter driving day; only three hours in the saddle to give us plenty of time in Chicago. Not that there’s ever enough time.

We breakfasted with Sara and Susannah at the Davenport Freighthouse Farmers Market, eating delicious food and watery Midwestern coffee with nondairy creamer. Davenport was a delightful town of rust-colored brick and well-kept old homes. And honestly, though I try to be a good West Coaster and know about the geography of the interior (the “goo” as it’s been unfairly called), I had no idea the Mississippi River went right through town.

There was a bicycle ride across Iowa starting this weekend that Sara’s husband was away at; it was pleasing to learn that Iowa has a burgeoning bicycle culture, though I have no sympathy for those who’d willingly choose to ride long distances across baking cornfields in the humid Midwestern summer. But hey, more power to him and them!

The ride from Davenport to Chicago was a swift three hours. More farmland, though perhaps not quite as exclusively corn and soy. As a side note, we’d been hearing all sorts of reports of drought and crop damage. Ladies and gentlemen, expect high corn prices this year, and perhaps also a scarcity of tofu. It’s been a long, hot, and rainless summer in the Heartland. Will this help wean our nation from its insatiable hunger for corn and its awful value-added byproducts? Prolly not. But one can hope. 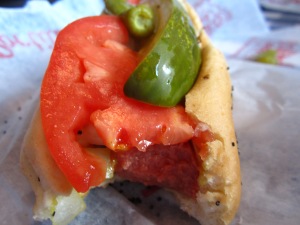 We stopped only for Chicago-style hot dogs, at the well-known local chain Portello’s. For those not yet in the know, a Chiacgo-style dog is a juicy, all-beef affair loaed with green relish, onions, yellow mustard, a big ol’ pickle spear, and optional banana peppers. A word to those food travel show hosts: that bright green relish that you have promoted, and for which I have pined? I have yet to see it at any of these hot dog places. It’s all the standard drab green pickled relish that you find anywhere. Camon, Chicago! Get on it. Bright green for the tourists. We need spectacle!

We stopped finally in the neighborhood of Wicker Park. Our friends Glenda and Ben were still at work and left us an envelope with house keys, parking permit, and even a Sharpie with which to write on the permit. We hadn’t been in the car long, but were still hot and sweaty and cranky. I had been in touch with another old college friend who lives in Chicago, and somehow in the process of coordinating with Facebook and iPhones and email we still managed to have only a few minutes with her, catching her only after she’d been waiting around for an hour.

I hadn’t seen Molly for twelve years, when I last moved out of Kingman Hall student co-op in Berkeley where we both lived. Honestly, I couldn’t pinpoint when precisely I last saw her, but I’m pretty sure it didn’t involve anything so formal as a goodbye. Those final days of school are always chaotic. But Molly had always been a friend and fellow food enthusiast. I was the co-op kitchen manager — my job entailed placing vendor orders, planning menus, making sure the kitchen was well-stocked and my housemates well-trained as cooks — and Molly worked at the co-op central office and distribution warehouse, in addition to living in the same house of fifty-five students. 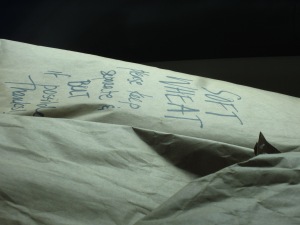 She now lives back in her native Illinois, where she owns and operates a farm with her father. She grows wheat and beans to sell at local farmers markets. When we saw her, she had a Toyota Priusful of twenty-five pound sacks of wheat that she had to deliver to a miller in Dixon, a hundred miles away. I did manage to score a free bag of homegrown wheat berries before she left.

Glenda and Ben wouldn’t be home until seven, so we had a few hours with which to explore Chicago. As a Minnesotan, Angie had been to Chicago several times before. I myself had only been here once, for a Book Expo in 2005. I had stayed two days longer after the convention to wander around the city on my own, wearing out a pair of shoes in the process. My heart leaped when we got off the El Blue Line at Lake Street and came to the bridge: what a glorious view! What a beautiful city! Blessed Chicago, you are one of the truly great cities. Architecture, food, people, music, labor, politics — my god, you have an illustrious history. 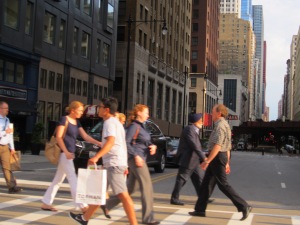 Next on my to-do list for Chicago was some deep dish pizza. We walked to the famous — some might say cliché — Gino’s East, only to find a long line behind a velvet rope with a bouncer guiding foot traffic. It was only four o’clock. Not only would the wait time be half an hour in line, followed by forty-five minutes for the pizza once inside, but we found out that they don’t even serve slices. Bummer, man. 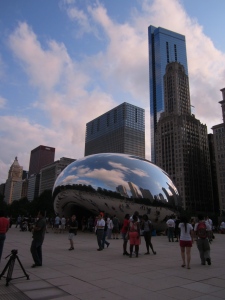 Next stop was the Bean — official name “Cloud Gate” — at Millenium Park downtown. Snapped a lot of photos — did I mention how photogenic this city is? Chicago, you’re gorgeous. 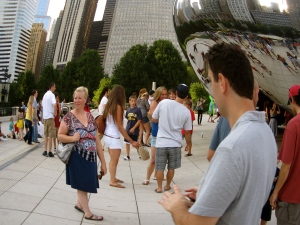 Across the park was another kinetic sculpture of two opposing monoliths shedding water out of its glass bricks. Projected onto the weeping glass surface from within are images of girls making faces. When they start to blow, watch where you’re standing.

After cooling off in the refreshing mist of the water park, we headed back to the train and Wicker Park to greet our friends and head to dinner. Dinner was at the unbelievably good Mexique, a French-Mexican fusion restuarant under the direction of Chef Carlos Gaytan. We ordered the tasting menu and were not disappointed. Fresh ceviche with watermelon relish. Beet and goat cheese salad with beet reduction. Pan-fried skate wing with poblano coulis. Seared pork belly with tamarind sauce. Lamb cordera. Chocolate-ancho enchiladas with vanilla gelato and apple tart for dessert. And a nice bottle of Alma Negra Malbec for the table. Service was exceptionally slow, but warm and friendly and well worth the wait. Chef Gaytan even came by the table to check on us later in the evening. All in all, a wonderful cap to a wonder-filled day. 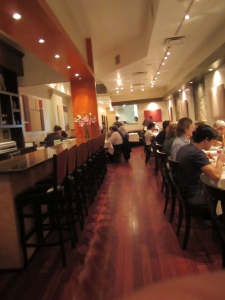