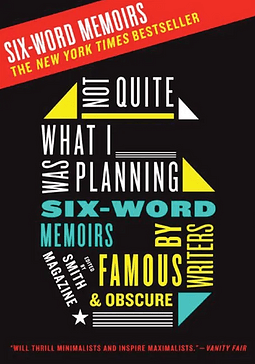 I accepted the challenge, and my entry was selected for inclusion in the anthology published by HarperPerennial the following year.

"I still make coffee for two."

The anthology became a New York Times bestseller and spawned numerous spinoffs. My story was included on the back cover and on all the press materials. It was even read aloud (along with Stephen Colbert's entry!) and talked about by the late Neal Conan on Talk of the Nation. I still periodically get emails from people about it, and it even inspired a short film.

I think this exemplifies my economy of language and ability to craft an emotional story from simple components.